My Long Overdue Update (Part One)

Well, let’s be honest. It’s been a few years since I’ve posted on this blog. I’m sorry for leaving all of my readers, though it seems like your support for Curvy And Curious somehow hasn’t faded. I guess we are a strong community! I guess that meand I should feel comfortable sharing my story with you…

It was 2014, Curvy And Curious was still in full swing, but behind the scenes things were becoming a bit too much. I ended up struggling with Bipolar disorder, and left my family to move in with a male Photographer I hardly knew to Newark, NJ (not a very nice place). We turned the place into a studio. I went slowly from being a confident model to fading behind the scenes as abuse started going on – both mental and physical. I learned how to work the camera, assisting on photo and video shoots. However, soon things took a turn for the worse after he started becoming more and more abusive, sending me into a downward spiral.

One day in October, 2015 it all came crashing down and I had had enough. I decided that was it. I decided it was time to boss up and get the police involved. He was taken away and a weight was lifted. I was free from the negative force keeping me from living my life. Now it was time to start over.

I was all alone with just my cameras, and had to learn to make due with what I had invested in. Practice makes perfect, and I have now been a professional photographer on my own for over 4 years now. I’ve had my own Portrait Studio for the past year and a half. I also am an expert Real Estate photographer. I have also Filmed abd Edited an award winning Documentary film called “Fascination: Helena’s Story.”

If it hadn’t been for the man that tore me down into shreds of nothing, I wouldn’t be the strong, successful, single and strong woman that I am today. Am I still damaged from what he did to me? Of course – soneone I loved tried to take my life. But would I change it for anything in the world? Not now I wouldn’t.

Keep an eye out for two of my shoots being published in two of Black And Black Magazine’s March issues!

Feel free to send in any questions about where I’ve been the past few years and any ideas to get CurvyandCurious going again!

Please check out my photography work at WWW.ELLIPORTRAITS.COM

After falling into a YouTube blackhole, I decided to try and decode some of the imagery that Beyonce has been working into her videos to subliminally influence the public ever since her “Beyonce” and “Sasha Fierce” gave us all a little bit more reason to point towards crazy conspiracies like the Illuminati, Satanism in the Music industry, and especially Mind control and MK Ultra… which is pretty much why this video and others released simultaneously, were such a hit with conspiracy theorists from day 1.

I will spare you all of details such as the Elevator fight, Blood Sacrifices, etc., and allow you to research that on your own, because I am breaking this video for “Hold Up” down from views from an entirely different culture. I am referring to the Nigerian religion of Yoruba (also practiced in Cuba), Santeria, and Hudu/Vudu (or VooDoo) – which all follow similar traits, including spells, animal sacrifice, etc. Beyonce is clear that her mother is Creole, and she may very well have grown up practicing the rituals of these religions.

The music video for “Formation” was made to push your political buttons, but we all know there was some controversy around Beyonce dropping “Lemonade.” All of Beyonce’s music from 2006 on is manufactured, but it seems she was able to snap out of Jay-Z’s mind control and make this video that HE may not understand. She is finally starting to see her man’s corruption, and is trying to take back the upper hand. I will show and explain to you how she put her hubby in place, via these visuals…

LETS START WITH THE BASICS OF YORUBA 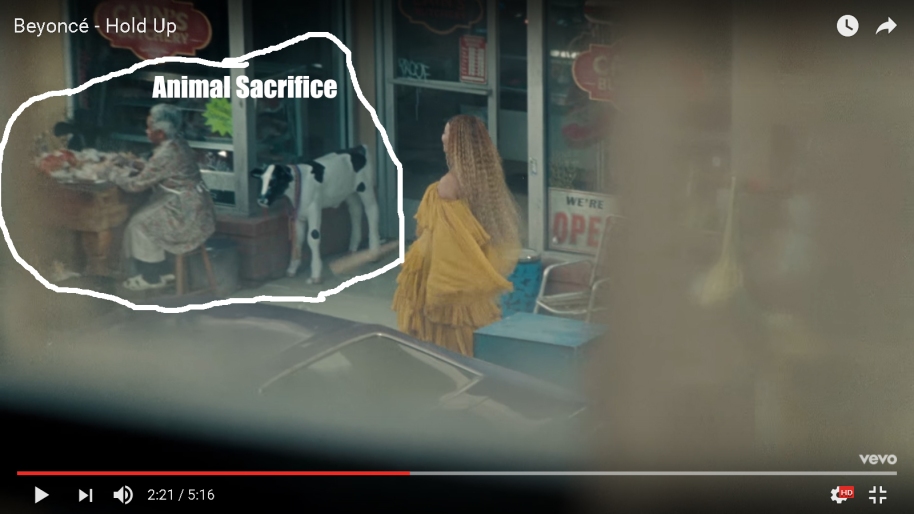 Very early on we already see livestock and carcass. Animal Sacrifice is a stable in Voodoo, Yoruba, and Santeria sacrifices.

“Everyone has heard of the phrase, “opposites attract”. That is the case in many situations in scenarios. Legend has it that Chango was the king of the Oyo, a great city in West Africa. He had numerous wives, but he was particularly fond of Oshun, the river goddess. Their marriage symbolizes a union of two great basic forces known as the feminine essence and the masculine power…”

Beyonce, adorned in flowing neutral yellow, represents her Orisha, or, Guardian, “Oshun,” The African Goddess of Love and Sweet Waters. 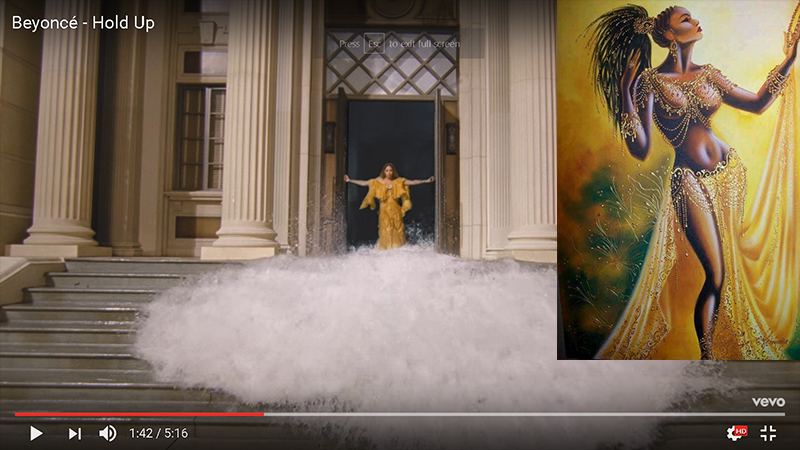 Oshun was the “principle” wife of Chango, the god of Fire and lightening, whom she fell in love with at a drum festival, and stayed with him despite his numerous other love affairs wish different Orishas. Oshun is Chango’s Ride or die… but that’s not to say jealousy doesn’t still exist…

Beyonce smashes a SPA window, including a “cash” sign, smooth wigs in the window, and a sign for free Facials…. *ahem* …  maybe he finds “Becky”at the Asian Massage Parlor…

When Queen Bey smashes the window of the spa, the fire of Shango comes raging around the corner… and dude… what are those shoes???? 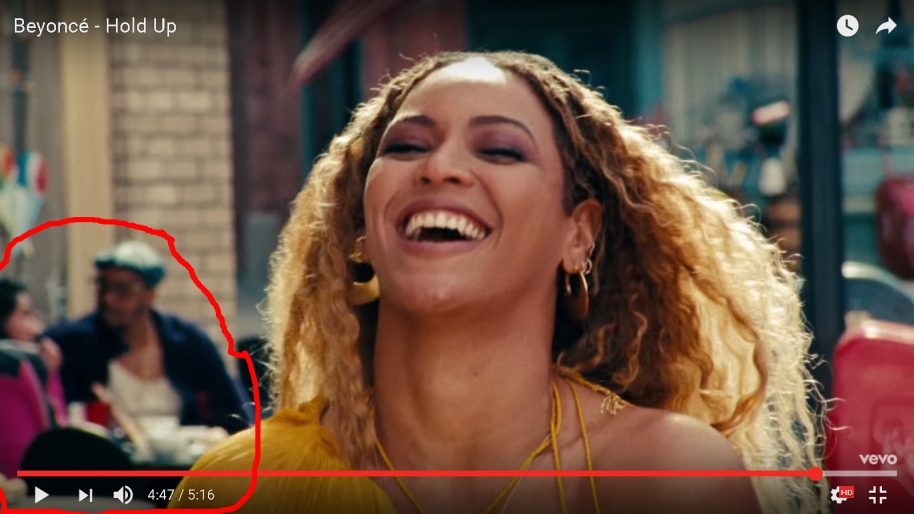 Doesn’t that guy look pretty familiar… I mean the hat, glasses… ya know..

Beyonce doesn’t look very scared of feeling the wrath of Chango, her husband and the Guardian on fire and lightening.

In a final F U to Chango (aka Jay-Z), Beyonce smashes the top off of the hydrant andances in the water, not fearing any consequences.

With all of the conspiracy theories surrounding this royalty of the Illuminati, maybe Beyonce is using “Lemonade” to break free from the mind control of the Illuminati and go back to her African and Hatian Roots… Could religion be the nail in the coffin for Jay-Z and Beyonce?

Hey Curvy Girls! Are you curious to know what your best asset is, in a MAN’s opinion? What could you work on to look your best, or figure out what your man might be thinking about that thing you’re too embarrassed to ask?

Well we were blessed enough to find Big Nate, who is here to answer all of our burning questions about ourself, our bodies, and what men really think about us “thick” girls. No BS – only #REALALK happens here!

To find out what Nate thinks, email your pictrue and/or questions to http://www.curvyandcuriousblog@gmail.com OR on Facebook OR contact BigNate directly at his section on Curvy And Curious – “Fat Chat with Big Nate”